"Neuro research is the solution for Centraal Beheer for pre testing ads. Neurensics translates the research insights into concrete and realistic adjustments of the advertising material which can be directly used by our advertising agency." Natasja van Buuren, Marketing Intelligence, Centraal Beheer

The new service of Centraal Beheer

Take a look at the two concepts below. They are in Dutch, but you can get a rough idea by viewing them.

How are these ad concepts tested?

Test participants viewed the concepts in the MRI. Why? To measure the unconscious emotions and factors activated by the concepts.

These unconscious emotions and factors influence consumer behaviour. They can only be measured with fMRI, as fMRI provides access to brain regions where advertising effects are active.

What are the most important emotions and factors for consumer behaviour?

There are 13 emotions and factors relevant for consumer behaviour, such as Desire, Trust and Attention.

How do we know which emotions are effective?

The activated emotions and factors are compared with established benchmarks for Effective, Likeable and Annoying storyboards.

An effective ad strikes a good balance between positive and negative emotions, where the positive emotions persist at the end of the ad.

How are the emotions and factors further measured and interpreted?

fMRI: Bouncing Castle scores high on the positive emotions of Value and Desire

Bouncing Castle scores above average on the emotions: reward (Value) and attraction (Desire) (see the peaks in the green and purple areas). This indicates the activation of positive emotions. Brain Guided Interpretation (BGI) was used to discover which scenes activated these emotions:

Bouncing Castle scores low on the positive emotion of Expectation (see green area). We investigated the cause with BGI:

Details on the services should be included to increase the score on Expectation. This gave Centraal Beheer the idea to communicate the service details through other media channels to complement the TV ads. 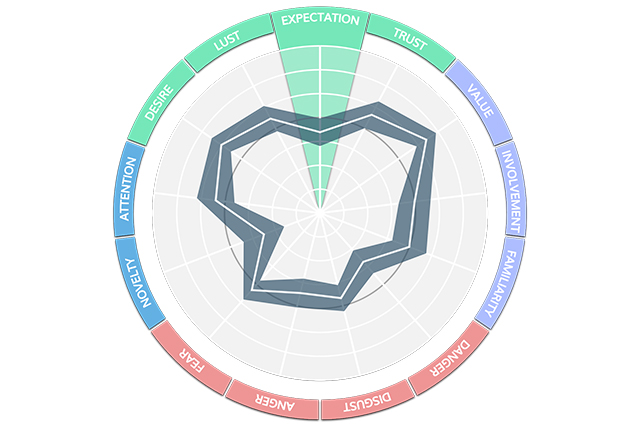 fMRI: Trampoline shows an imbalance of emotions, but is Likeable.

The balance of positive and negative emotions is poorer for Trampoline compared to Bouncing Castle (see the difference between the two concepts, green line = Trampoline and the grey line = Bouncing Castle). Specifically, Trampoline scores lower on Value and Desire.

Although Trampoline does not score above average ads in effectiveness (an effective concept activates more positive than negative emotions), it does score high on Likeability. BGI was used to investigate which scenes produced this likeable feeling:

Why doesn't Trampoline activate the right balance of emotions?

The humour in the last scene unconsciously activates negative emotions

The scene that participants consciously described as funny, actually activated unconscious negative emotions. In the very first scene where the father and son jumps on the trampoline next to the cliff, the fMRI time line drops below 0. After this, the line rises slightly to the 0-point, but not high enough. The ad even ends with the timeline below 0.

Participants do not have unconscious positive responses to the solution offered by Centraal Beheer (an insurance), because it is not an actual solution: should a person fall off the cliff, insurance wouldn't matter because the person would probably be dead.

This concept activated significantly less reward (Value) and Desire than Bouncing Castle. The Bouncing Castle concept introduces a problem - the castle floating to the sky - which can be resolved by insurance. This results in a positive ending, but Trampoline does not. 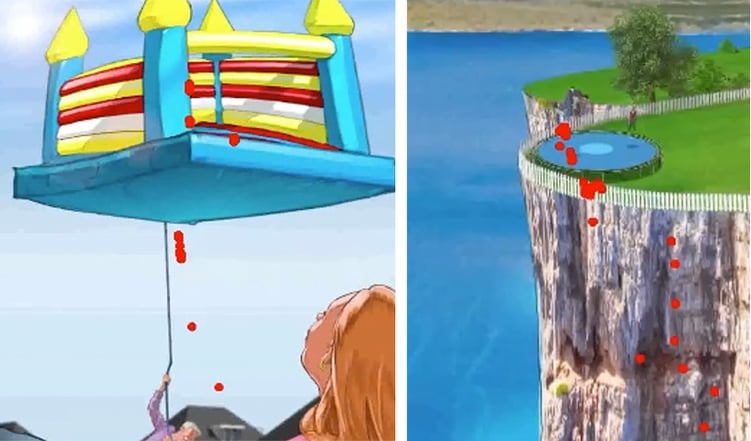 Eye Tracking shows that the humorous situations were observed closely.

However, this wasn't successful for Trampoline. The danger portrayed wasn't sufficiently compensated by positive emotions. As a result, the positive emotions of Desire and Value, which are essential for consumer behaviour, are low.

The concept 'Bouncing Castle' is the clear winner with a lot of potential. The concept scored above average on the positive emotions of Desire and Value and created a good balance of all emotions.

Centraal Beheer followed our advice and chose the 'Bouncing Castle' concept. They've adapted the concept to have the father display less fear when the castle floats to the sky, in order to activate (even) less negative emotions.

Feel free to contact us about the research possibilities

How to win an award for effective advertising?